How would you describe the music that you typically create?

• i create music to give others motivation to push them selfs on to bigger obstacles, my music has many flows i can go from rapping about the struggle , pain from getting into a chill vibe where someone can sit there and vibe to.

what do you think about the border situation and about Biden ?

• i think it’s really messed up , i come from being poor from my mother being a immigrant and i take it on big i think everyone should get treated the same , we all human beings.

what is the intake on giving back to the community?

• i want to give back in so many ways from sales people , from little kids who ain’t having nothing , also creating a merch clothes im going to give out .

if it wasn’t for your rap what would you be doing?

• I’ll be pursuing my other goal i had plan which is being a barber , some kind of hustle to get out the mud.

• im a trapper that turned into a rapper just trying to get out the mud the trenches. 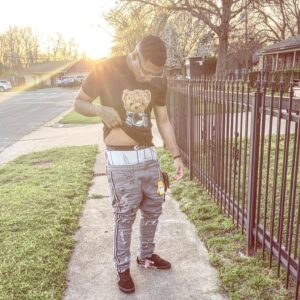 what is the most tragic thing you been thru in your life?

• coming from nothing , being raised by one mother dropping out of school to hustle put food on the table .

• haha thots will get the job done

home made tortillas are store bought?

if you could collab with anyone artist who would it be and why?

are you going to stay independent are try to get recorded deal?

• im very consistent with my music that it really don’t matter to me aslong we all getting paper & winning , but I’d say getting a deal.