Since A Young Child Music has Always Affected TypeShit Jazzi. Born In Houston and Raised in San Antonio’s TypeShit Had Been Around Diverse amounts of music. From the Country & Classic Rock, The Classics From Houston Legends We Know and Love,

To The TEJANO embedded in her everyday life as a child, TypeShit has always found a love for music. It was soon when she discovered her love for HipHop and RnB. Growing up she was a very introverted person and writing poetry was always a way to express herself through making rnb tracks. It wasn’t until 2018 where she decided she had a story to tell , that she knew many other Young Single Mothers who have been through the struggles and pain she had endured would be able to relate and feel heard. The moment she stepped into the booth and laid down her soul she knew this was something she needed to take to the next level. Aside from Working, being a single mother, &working on her next project, it is the music she tries to never lose touch with. Reminding herself everyday that we all need to express in order to heal and and keep growing.

#ProjectBully has also been a great insight into her story as well. Being her first project out she’s been so proud of how many people it has reached and how much it has affected people who relate to her story. She can’t wait to continue her journey with those who really support her. 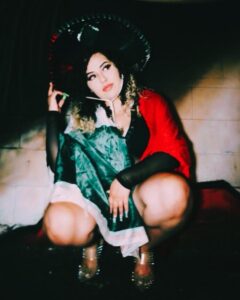